My mission is to explore how other countries around the world are dealing with education and special education issues.

I would like to visit and observe different types of schools that have proven records of success, wherever those schools may be. I would like to meet with school directors and administrators, government officials, leaders in the business world, and others who are responsible for implementing education systems or otherwise connected to education to learn more about how education is being addressed in their communities.

Please do not hesitate to share your thoughts or ideas regarding the above. Read more about my mission here.

On Tuesday, November 5 I will be participating in an education law panel discussion at Academics West, a private therapeutic educational program that offers students with special needs a flexible and supportive learning environment.

The focus of the discussion will be about enhancing your advocacy for your child with special needs by securing the appropriate legal and clinical expertise.  This is a great opportunity to learn more about some of the resources available to children with special needs.

I am providing the relevant information below for all who may wish to attend.  If you would like to attend, please make sure to RSVP to Scott Apgar as indicated below. 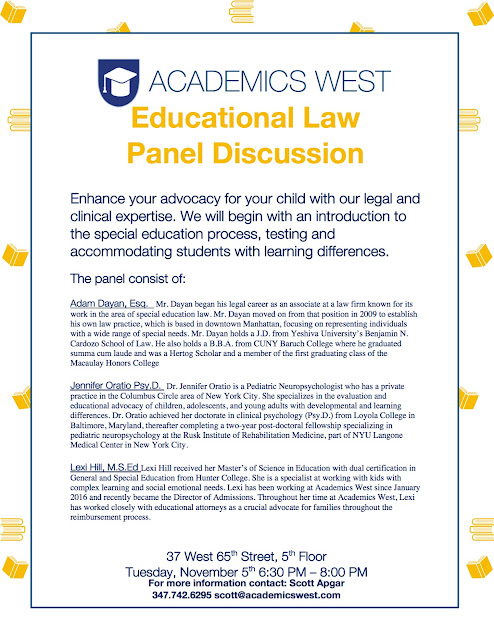 I am pleased to announce that I have been recognized by Super Lawyers as a Rising Star for the second consecutive year.  Super Lawyers is a rating service of outstanding lawyers who have attained a high degree of peer recognition and professional achievement.

I am also happy to share an article in which I was quoted about how parents can advocate for the education of a child with special needs.  The article was featured in the October 2019 issue of Super Lawyers Magazine and can be accessed by clicking on this link.
Posted by Adam Dayan, Esq. at 11:54 AM

Parents considering transitioning their child from one school placement to another school placement should be familiar with the concept of pendency and the "substantially similar" standard in situations where the prior placement was funded by the parents' local school district (District).

Parents initially may balk at the idea of changing their child's placement and/or having to initiate litigation in order to secure funding, which always involves a certain amount of risk.  Prevailing case law, however, sets forth that if the child's new placement is "substantially similar" to the previous placement, the District is required to maintain the child in the new placement during the pendency of legal proceedings.  This is a powerful legal mechanism for parents who have identified an appropriate new placement but do not have the means to lay out the tuition owed.  It is also very helpful to schools that would like to accept students who are the right fit for their program but would have difficulty waiting for a final outcome of the case before starting to receive funding from the District.

Through pendency, if the new placement is determined to be substantially similar to the previous one, the District will be required to make tuition payments to the new placement retroactive to the date of the filing of the due process complaint (DPC) through the conclusion of the legal proceedings.  This makes it possible for parents to enroll their child in the new school placement with the security of knowing that the tuition will be funded during the interim regardless of the final outcome of the case on the merits.

Recent federal court cases address the substantially similar standard under pendency.  For example, in Navarro Carillo v. NYCDOE, 384 F.Supp.3d 441 (S.D.N.Y. 2019), the student was placed at iHope, an independent private school for children with brain and injuries or disorders for the 2017-2018 school year.  An IHO determined that iHope was the student's appropriate placement for the 2017-2018 school year.  Subsequently, for the 2018-2019 school year, the parents decided to enroll their child in a different but similar school, iBrain, and sought pendency for iBrain.  I won't go into the full administrative history of the case here; however, I will note that the case made its way to federal court and the U.S. District Court for the Southern District of New York concluded that, based on the substantial similarity between iHope and iBrain, the District had an obligation to fund iBrain during the duration of the legal proceedings pursuant to pendency.

This issue was addressed in other federal court cases as well.  See Abrams v. Carranza, 2019 WL 2385561 (S.D.N.Y. 2019); Soria v. NYCDOE 2019 WL 3715057 (S.D.N.Y. 2019).  I am not going to discuss those cases in depth here.  However, I will note that in Soria it was made clear that the fact that parents unilaterally moved the student (as opposed to being forced to do so due to the prior program shutting down, for example) was not a relevant consideration.  It was also made clear that parents must present sufficient evidence to demonstrate that the two schools being considered are substantially similar.  Considerations for the "substantially similar" analysis might include the type of school, the size of the classrooms, the type of curriculum, the credentials of the teachers, the student's daily schedule, and the related services and supports provided.  For more about related services considerations in this context see Angamarca v. NYCDOE, 2019 WL 3034912 (S.D.N.Y. 2019).

The overarching point here is that if a student was previously enrolled in a program funded by the District, whether pursuant to an IEP or FOFD, just because the parents are transitioning their child to a new school placement does not mean that the stream of funding from the District will be cut off.  As illustrated above, if the new school placement is substantially similar to the old school placement, parents may be entitled to continue receiving funding for the new placement during the pendency of their legal proceedings until a final decision is reached regardless of the final outcome of the case.
Posted by Adam Dayan, Esq. at 10:07 AM

Dyslexia Event at the NYC Bar Association on Monday, October 21

There is full-day seminar on dyslexia happening at the New York City Bar Association on Monday, October 21.

The event is intended for lawyers and non-legal professionals, and will be available live and via webcast.

This program promises to provide lawyers and clinicians an inside view into how the special education system works for families with potentially dyslexic and diagnosed dyslexic children.  From the initial identification problem to selecting the right intervention services to litigation pitfalls and pointers, the panelists will walk attendees through the stages of the special education system as it relates specifically to identifying and representing a child with dyslexia.
More information about the event can be found here for those who might be interested.
Posted by Adam Dayan, Esq. at 12:48 PM

The purpose of this blog is to inform parents about developments in the world of education and special education, including current events, trends within the Department of Education, important cases at the administrative and federal levels, and relevant changes in federal and state law and regulations. The information you obtain here is not, nor is it intended to be, legal advice. You should consult with an attorney for advice about your specific circumstances.

Promote Your Page Too